Will An Aspirin A Day Really Keep Heart Attacks Away? - Cultural Health Solutions

Taking a baby aspirin daily to reduce the risk of a heart attack and even colorectal cancer has been standard practice for years.  As time goes by and the number of trials accumulate, we often get a better snapshot of whether a medication truly offers its intended benefit, and whether certain risks and side effects are uncovered.

This is why the medical profession may vehemently support one particular practice for many years such as the universal recommendation of hormone replacement therapy for most postmenopausal women, and then all of a sudden turn 180 degrees and remove their strong endorsement after a review of multiple trials in the form of a meta-analysis.

There are countless examples we can list off here of a complete reversal of a standard drug or practice recommendation, which doesn't necessarily reflect incompetence, but instead the imperfect and unpredictable nature of how drugs interact with our body over time.  Rigorous and not so rigorous drug trials by pharma companies can hardly detect and anticipate the long term effects of medications they release for public consumption.

With that background, let's now examine why aspirin may no longer be considered the wonder drug to shield you against the risk of heart disease and colon cancer.  I am going to start off as I often do with a bit of deep science, so if I lose you on this, just scroll down to my basic recommendations based on the latest studies.

Aspirin is thought to lower the risk of heart attack by blocking a biochemical pathway involved in blood clotting and inflammation, referred to as the arachidonic acid (AA) pathway (see image below).  AA is a byproduct derived from the breakdown of specialized fats on your cell membrane called phospholipids.  Notice how the AA pathway bifurcates in the image below into 2 separate paths called COX1 and COX2.

These pathways are complex, but to simplify, think of COX1 (on the left side) as being the pathway that increases blood clotting by causing substances called platelets to stick together, in addition to causing your blood vessel to constrict (aka vasoconstriction).  You can imagine that sticky platelets in the midst of a constricted blood vessel would increase the risk of a heart attack.

The COX2 pathway on the right is predominantly involved with activating inflammation via the action of substances called prostaglandins.  Notice how aspirin actually blocks both the COX1 side (clotting) and the COX2 side (inflammation). 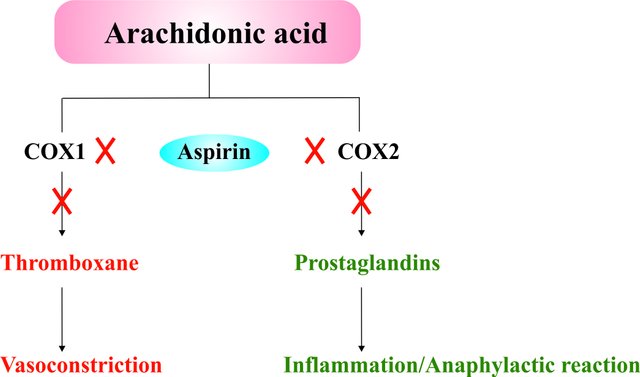 When you get headaches or a fever, it's aspirin's inhibition of the COX2 side that helps to reduce inflammation, which in turn reduces your headache pain and your fever.  However it can't selectively just block the COX2 side.  It also blocks COX1 (blood clotting) which is why taking aspirin can increase your risk of bleeding by blocking your body's ability to form blood clots.

Bleeding from the digestive tract in particular is a concerning side effect of using aspirin and other NSAIDs (non-steroidal anti-inflammatory drugs) like ibuprofen and naproxen, in patients who are sensitive to these effects or others using these drugs for a long period of time.

To address this concern, pharma companies developed COX2-specific inhibitors that were intended to just target inflammation and not COX1 to avoid bleeding complications.  Sounds like a great idea, right?  Just turn off the inflammation circuit while keeping on the blood clotting circuit so you avoid bleeding.  How could anything go wrong?

Well it did go wrong because as I mentioned, the human body is far more complex than a series of circuits or switches that you turn on or off at will with drugs.

You might recall the now infamous COX2-specific drugs of this class like Vioxx and Bextra, which got pulled off the market for increasing heart attack risk.  Celebrex is another popular COX2 drug that's still available at a low dose.

I went into all this detail so you can understand that although pharma has mostly good intentions when creating these types of drugs, like creating a painkiller that doesn't cause bleeding, the problems of the human body are not always easily solved.

Now that you understand the pathways inhibited by aspirin, let's go over the most recent studies and then highlight key recommendations.  First of all, in terms of terminology, when we say should aspirin be used for primary prevention, we are talking about the use of aspirin in individuals with no known atherosclerotic (plaque-causing) heart disease.

The above table lists a timeline and the recommendations of various expert groups (AHA, USPSTF, etc.) regarding using aspirin for primary prevention.  You can see that in 2009, the USPSTF (U.S. Preventive Services Task Force) set a grade A recommendation (strongest endorsement) for men (ages 45-79) and women (ages 55-79) to take aspirin if their risk of bleeding was low.  This led to a huge percent of adults picking up the habit of taking a baby aspirin daily in an effort to reduce their risk of heart disease.

Now fast forward to 2019, where the AHA/ACC (American Heart Association/American College of Cardiology) are recommending against taking aspirin if you're above 70 and giving a weak recommendation for ages 40-70 if the risk of heart disease is high and the risk of bleeding is low.  For example, higher risk can be estimated if your 10-year risk of heart disease is 10 percent or greater using this risk calculator. The ESC (European Society of Cardiology) has essentially banned taking aspiring for primary prevention.

Why the sudden about-face?  After reviewing multiple large trials it was found that the benefit of aspirin in preventing heart attacks is either non-existent, inconclusive, or small at best, and in most cases outweighed by the risk of bleeding.

If you think drugs like aspirin and statin cholesterol medications permit you to eat unhealthy foods and lead a high risk lifestyle, think again.  Their benefits are miniscule in comparison with those of healthy lifestyle changes.

Again to emphasize, if you have existing atherosclerotic heart disease, you will likely be on aspirin (confirm with your doctor).  If you've had a heart scan done that shows plaque, then aspirin is a reasonable consideration, especially if your CAC (coronary artery calcium) score is 100 or above as shown in this study, but needs to be weighed against your risk of bleeding.  Read my post here to learn more about heart scans.

Also, if you think you may be having an active heart attack, it is still recommended to chew on a full strength aspirin (325 mg).  Don't hesitate to do this and I recommend you read my post here that explains how to take aspirin and other precautions if you or a loved one are experiencing a possible heart attack.

After reviewing the more recent studies on aspirin and all of the guideline statements, I've also reached the conclusion that aspirin for primary prevention does not make sense for the majority of individuals.  If you are someone who refuses to make lifestyle changes and have multiple risk factors such as diabetes, high blood pressure, smoking, etc., then aspirin is a consideration, but I assure you that it will not drop you from your high risk category.  You need to prioritize lifestyle changes above all else.  I have seen plenty of patients with heart attacks who took aspirin for years, thinking they were fully protected.  Not even close.

Also keep in mind that for those of you suffering from chronic pain issues who might be taking aspirin or NSAID drugs like ibuprofen or naproxen on a long-term basis, there is an increased risk of high blood pressure, heart disease, and serious bleeding to name a few of the side effects.  Just because a drug is over-the-counter doesn't mean it's safe.  Many of my patients can relieve a significant amount of their pain by eating an anti-inflammatory diet, losing weight, and improving their strength and mobility.

The decision to take aspirin for heart disease prevention should not be taken lightly.  Be sure to talk to your doctor if you are unsure since he/she can weigh the benefits and risks and help you decide.